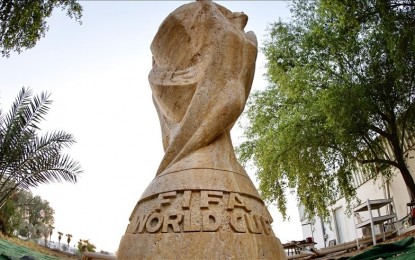 The 2022 FIFA World Cup is set to begin on Nov. 20 in Qatar but many football stars such as French midfielders N’Golo Kante and Paul Pogba, and Portuguese forward Diogo Jota still have injury problems to miss the tournament.

One of the best forwards in Europe – Erling Haaland from Norway, Egyptian winger Mohamed Salah, Italian midfielder Marco Verratti, and goalkeeper Gianluigi Donnarumma – are also the other big names to miss the Qatar 2022 as their nations were eliminated in qualifying rounds.

Chelsea’s French midfielder Kante, who was the 2018 World Cup champion, was ruled out of the Qatar 2022 after Chelsea confirmed in October that the 31-year-old is expected to be sidelined for four months following surgery due to a hamstring injury.

Juventus’ French midfielder Paul Pogba, one of the main pillars of Les Bleus, will not play for his nation in Qatar due to a knee injury.

Pogba, 29, who won the world title in Russia four years ago, underwent knee surgery in September, months after his return from Manchester United.

This season, Pogba has not played any games for Juventus and is still in a healing period.

This week his agent Rafaela Pimenta said the experienced player “will still need recovery time from his surgery.”

This year’s World Cup will not feature Roma’s Dutch midfielder Georginio Wijnaldum as the 31-year-old broke his leg during training in August.

He suffered a fracture to the tibia in his right leg and is still ineligible to play.

Liverpool’s Portuguese forward Diogo Jota are among the players that will miss the 2022 World Cup due to injury problems.

Jota, 25, suffered a serious calf injury to be ruled out of the World Cup, as Liverpool manager Jurgen Klopp confirmed in October.

German forward Timo Werner will be out for the 2022 FIFA World Cup due to an ankle injury.

Werner, 26, was injured in a UEFA Champions League match on Wednesday.

“Timo Werner suffered an ankle injury last night in the win over Shakhtar Donetsk. Scans today in Leipzig showed that he has unfortunately torn the syndesmosis ligament in his left ankle and will therefore be out for the rest of 2022,” his club RB Leipzig said.

Werner played for Germany in the 2018 World Cup and the UEFA EURO 2020 tournaments.

Argentine star Paulo Dybala’s injury dismayed his nation as the Roma forward is likely to miss the World Cup.

The 28-year-old sustained a hamstring injury in October and is expected to return to the game in late November.

Dybala may recover before the World Cup but he could not be a match-fit.

Meanwhile, Manchester United’s French central defender Raphael Varane may not travel to Qatar with his teammates due to a leg injury.

Varane, 29, was injured in his team’s Chelsea clash in late October.

The 2018 world champion left the field in tears.

Football fans will not be able to watch other football stars such as Norway’s Haaland, Egypt’s Salah, Italian midfielder Verratti, and his compatriot Donnarumma, who plays as a goalkeeper.

Norway were in the same group as the Netherlands and Türkiye but the Nordic team came third in the European qualifiers Group G and were eliminated in the group stage.

Egypt were another team that will not compete in Qatar.

In March, Senegal eliminated Egypt in the African qualifiers on penalties. So Liverpool’s winger Salah will not be in the World Cup.

Italian pair Verratti and Donnarumma, who are teammates at Paris Saint-Germain (PSG), are the other big names to miss the Qatar 2022.

Four-time world champions Italy were surprisingly beaten by North Macedonia 1-0 in the 2022 World Cup playoff semifinals in March, which means the end of the road for the Italians.

The Spanish football body said in a statement the team’s head coach Luis Enrique will submit the list of players on Nov. 11.