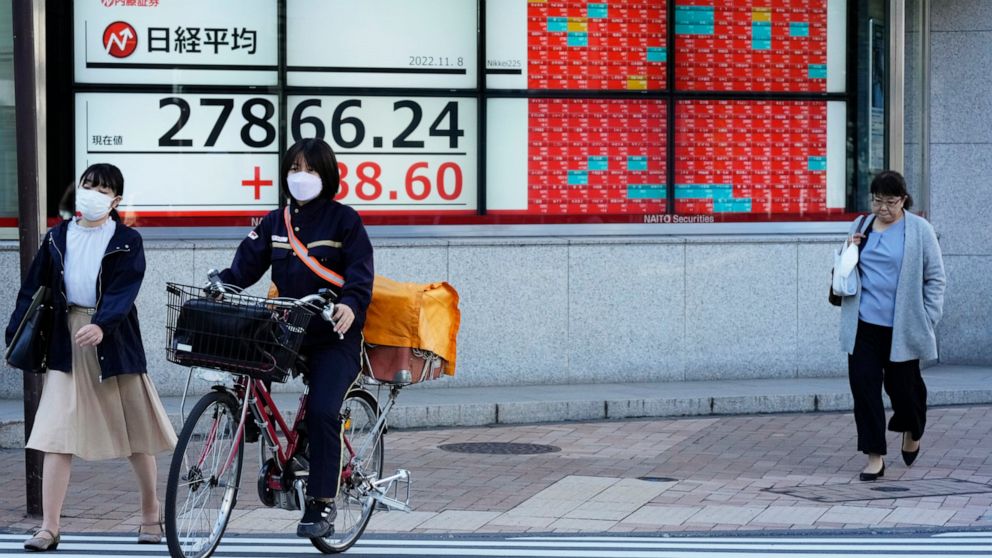 Asian stocks are mixed ahead of the U.S. midterm elections with trading likely to stay bumpy in a week that brings new inflation data and other events that could shake markets

TOKYO — Asian stocks were mixed Tuesday ahead of the U.S. midterm elections with trading likely to stay bumpy in a week that brings new inflation data and other events that could shake markets.

The week is full of potentially market-moving events, including U.S. inflation data and the election, which could leave the U.S. government split between Democrats and Republicans.

For Tuesday, at least, “Look for markets to trade political headline spin rather than substance,” Stephen Innes of SPI Asset Management said in a commentary.

Every seat in the U.S. House of Representatives is up for election this year, along with about a third of the U.S. Senate. On the line is control of both houses of Congress, currently under Democratic leadership.

Voters are also electing governors in most of the states this year. They’ll be in office in 2024 when the next presidential election happens and could affect election laws or vote certifications. Many state legislative and local authorities also are on the ballot.

A divided government would likely bring gridlock rather than big, sweeping policy changes that could upset tax and spending plans. Historically, when a Democratic White House has shared power with a split or Republican Congress, stocks have seen stronger gains than usual.

Analysts say a strong performance by Democrats in the elections could lead to increased spending to help the economy that might fuel inflation and leave the Federal Reserve obliged to continue to hike interest rates to get prices under control.

It may take a while to get clarity because of the process to count votes that came in through the mail.

Regardless of the outcome of Tuesday’s vote, “It is still all about inflation and while this report might not be as hot as the last few, it still should show that rents and the core-service sector part of the economy are still hot,” Edward Moya of Oanda said in a report.

Higher rates put the brakes on the economy by making it more expensive to buy a house, car or anything else on credit, though they take time to take effect. Rate hikes could bring a recession, and they tend to drag on prices for stocks and other investments.

A fourth straight month of moderating inflation from June’s 9.1% rate could afford the Federal Reserve leeway to loosen up a bit. The Fed has said that it may soon dial down the size of its increases to half a percentage point, after pushing through four straight mega increases of three-quarters of a point.

Monday’s gains for Wall Street came despite a shaky showing for its most influential stock. Apple rose 0.4% after dropping earlier in the day. It had warned customers they’ll have to wait longer to get the latest iPhones after anti-COVID restrictions were imposed on a contractor’s factory in China.

The reporting season for summertime profits is roughly 85% done, and S&P 500 companies are on track to deliver growth of a little more than 2%. Analysts are forecasting a drop in S&P 500 profits for the final three months of the year, of nearly 1.5%. They had been forecasting growth of 4% at the end of September.

Brent crude, the international pricing standard, gave up 45 cents to $97.47 per barrel.