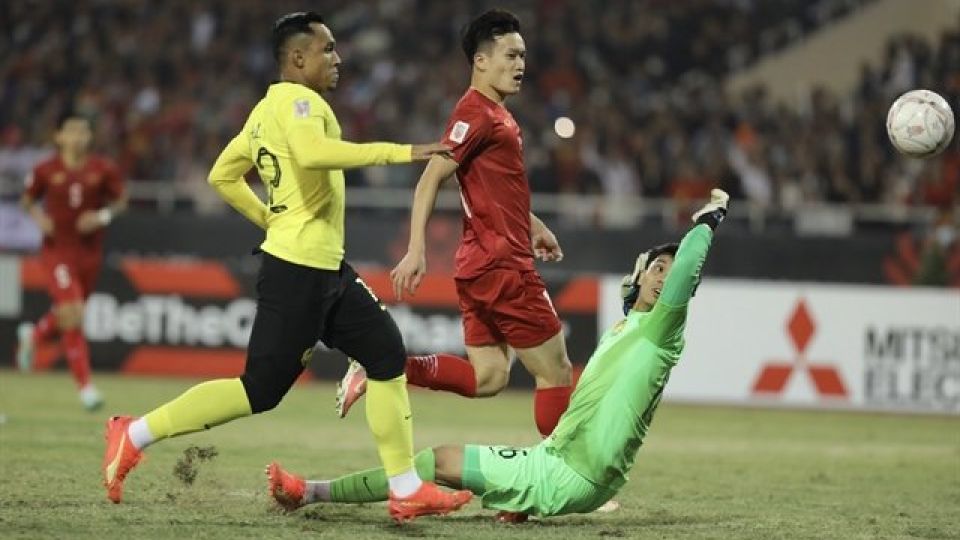 The match was Vietnam’s second after the 6-0 away win at Laos, and Malaysia’s third match after two wins against Myanmar and Laos.

HANOI — Việt Nam national football team won 3-0 against Malaysia in their second match at the AFF Cup on Tuesday.

The match on Tuesday was Việt Nam’s second after the 6-0 away win at Laos and Malaysia’s third match after two wins against Myanmar and Laos.

The match started with Malaysia surprisingly on the attack, pushing Việt Nam with many dangerous chances in the first 20 minutes. Had it not been for Đặng Văn Lâm’s talent, Harimau Malaya might have gotten the lead.

Đỗ Hùng Dũng’s corner reached Tiến Linh, who rose above five Malaysian defenders and headed the ball into the back of the net.

Things looked to be going well for the Golden Star Warriors, but just five minutes after Tiến Linh’s goal, Việt Nam were down to ten men after a clumsy challenge from Nguyễn Văn Toàn, who had already been booked.

With the man advantage, Malaysia pushed on and got a golden chance in the 36th minute when Hồ Tấn Tài missed a cross from the Malaysians’ right side. Ruventhiran Vengadesan sneaked past Tấn Tài and fired a shot which went inches wide.

Tấn Tài could have redeemed himself just three minutes later when his volley from Nguyễn Hoàng Đức’s corner was parried away by keeper Syihan Hazmi.

On the other side of the pitch, Đặng Văn Lâm’s work got harder after Văn Toàn’s red card. The Russian-born goalkeeper faced two shots on goal from the Malaysians in the first half’s final minutes but acrobatically saved both and ensured Việt Nam’s lead in the first half.

Despite being down to ten men, Việt Nam did not fall back and park the bus, contrary to how they usually played. A high pressing and active play were present from players such as Phan Văn Đức and Nguyễn Tiến Linh, who nearly scored.

The drama culminated in the 60th minute when Đoàn Văn Hậu’s sprint ended with a push on Azam Azmi, where both collided with the advertising boards outside the field of play.

Azmi retaliated with a kick to Văn Hậu’s head, and it did not go past referee Sato’s watchful eyes, who, after consulting with the linesman, handed Azmi a direct red card and a penalty to Việt Nam, as the foul happened near the six-yard box.

With the numbers evened out and the mentality advantage on their side, Việt Nam pushed on and got multiple chances on goal. Tiến Linh was the recipient of two consecutive opportunities but missed both in the space of ten minutes.

A recently recovered Nguyễn Quang Hải was brought onto the field and instantly made an impact with a fine through ball for Nguyễn Hoàng Đức, who finished with finesse and sealed Việt Nam’s 3-0 victory.

With this win, Việt Nam go top of Group B with 6 points, ahead of Malaysia on goal difference and with a game in hand.

Park Hang-seo’s team will play Singapore away on Friday; a victory will seal their place in the knockouts for a fifth consecutive time.