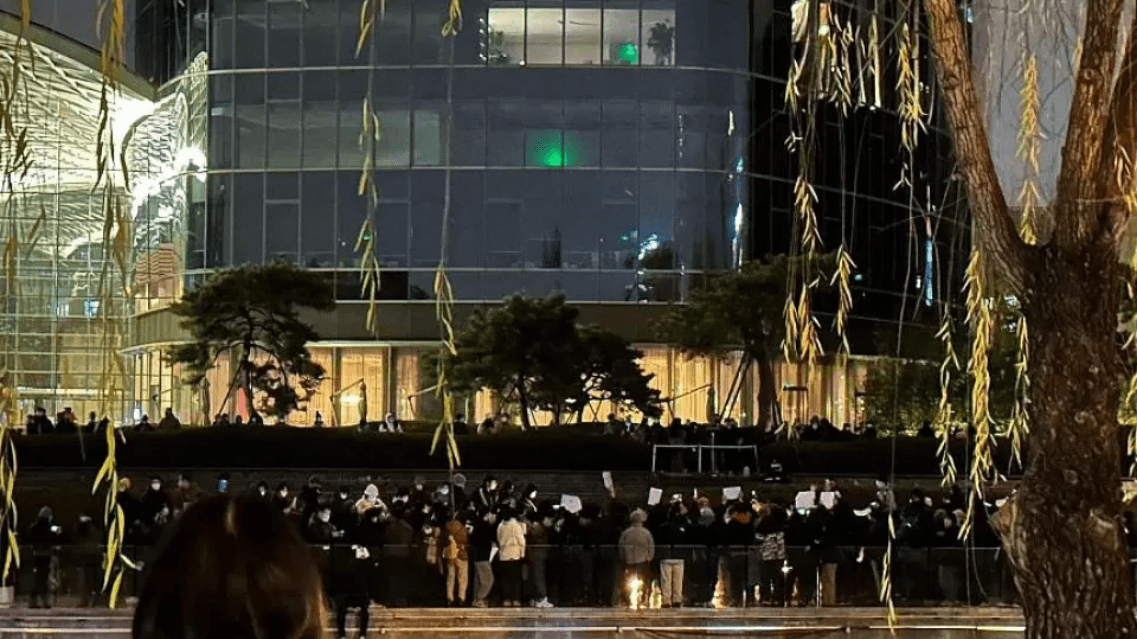 China signals no change to zero-Covid-19 policy amid mass protests that challenge Xi. The unprecedented wave of protests took place in Shanghai as well as universities in some cities, including Beijing and Nanjing.

BEIJING – China has signaled that it will stick with its longstanding zero-Covid-19 policy despite mass demonstrations breaking out across the country over its harsh containment measures, with some protesters openly calling for the resignation of President Xi Jinping.

The unprecedented wave of protests spread to Shanghai as well as universities in some cities, including Beijing and Nanjing.

And in a rare instance of public protest against the Chinese leadership, a video showed a group shouting: “Down with the Communist Party, down with Xi Jinping!”

In a front-page editorial on Sunday, the Communist Party’s official People’s Daily said China would “unwaveringly persist” in its Covid-19 policies and that “victory will be attained only by persisting to the end”.

The editorial emphasised correcting wrong attitudes, including “underestimating the problem, indifference and self-righteousness”.

The article said: “Our prevention and control policies can stand the test of history… (and they) are scientific and effective… There is no doubt about this, and we should have full confidence in this.”

But after almost three years of the pandemic, many Chinese are fed up with Covid-19 policies which have battered the economy and left many cooped up at home.

Since late last week, mass demonstrations have broken out in major cities, including Shanghai, Beijing, Nanjing, Wuhan, Urumqi and others.

Sunday’s protests broke out after an apartment fire three days earlier in Urumqi, the capital of China’s Xinjiang region, killed 10 people and injured nine others.

The case has proved to be a rallying point for those angry over the draconian measures employed to keep people at home.

On Sunday night, about 50 protesters gathered in Beijing’s embassy district to sing the Chinese national anthem and The Internationale, following the example of other protests that have erupted across the country.

They also held up blank sheets of paper as a symbol of protest against censorship, as uniformed police patrolled both sides of the Liangma River in the district. The protesters also lit candles and brought flowers to pay tribute to victims of the Xinjiang fire.

In Beijing’s prestigious Tsinghua University, hundreds gathered to sing the Chinese national anthem while holding up blank sheets of paper. In Nanjing’s Communication University of China, dozens held up similar pieces of white paper, illuminating them against the night sky by torchlights from their mobile phones.

Unhappiness over Covid-19 curbs has been brewing. In October, ahead of a key Communist Party congress, a man draped banners over a side of the busy Sitong Bridge in Beijing’s Haidian district, calling for an end to Mr Xi’s rule and the strict controls.

Analysts are watching to see if the protests across China gather momentum.

“The protests in China are like the tiny ant holes in the dam. While none of them are fatal on their own, enough of them, at strategic locations and times, could ultimately lead to the collapse of the mighty structure,” Singapore Management University law professor Henry Gao posted on Twitter.

At the moment, the protests are unlikely to cause Beijing to change course, said Associate Professor Alfred Wu from the Lee Kuan Yew School of Public Policy at the National University of Singapore.

“The government’s policy priority is very clear: regime stability is No. 1,” said Prof Wu, pointing to the state media’s latest editorials and signals from the party congress in October. “From the state, from the government’s perspective, the only solution now is to crack down on these protests.”

The Chinese authorities are in a bind as protests are coming at a time when cases are surging because of the highly infectious Omicron variant, meaning harsher lockdown measures would be needed to get a grip on infections.

Nationwide case counts reached 39,791 on Saturday, hitting a record high for a fourth day in a row. There was also another death, bringing total fatalities to 5,233.

Beijing reported 4,245 cases on Saturday. In some housing communities, people have questioned local officials over the legal basis of lockdown measures and defied requests to stay home, city residents told The Straits Times.

To make sure that residents stay put at home, some community officials have resorted to bolting building doors shut, as media practitioner Bernie Lee, 36, found out. He said the main door to his housing tower was chained shut on Sunday morning, and the lock was removed only after residents called the police.

“I was horrified. This is a fire hazard. What happens if there is an emergency? A lock like this is not something you can just pull apart,” he said.

In a regular press briefing on Sunday evening, Beijing officials promised to improve anti-Covid-19 measures, including banning the practice of barricading the gates and entrances of buildings and residential compounds in high-risk areas. In addition, passages must remain clear for medical transport, emergency escapes and rescues.