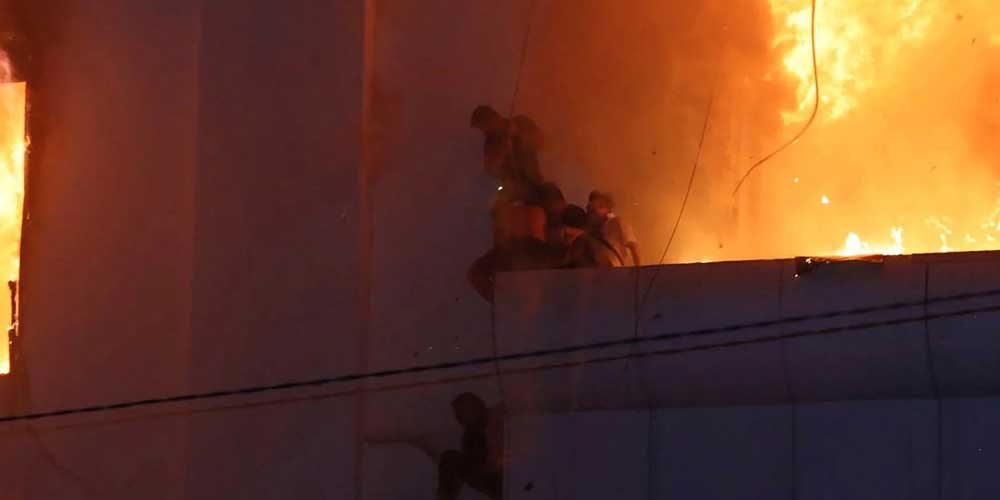 The demolition of the Grand Diamond City Hotel & Casino in Poipet, Cambodia, continues following the deadly fire in December. Even now, a month later, the property sustains its eerie attack on the city, with another fire breaking out as crews were tearing it down.

In the uncontrollable inferno in December, when everyone should have been celebrating the holidays, at least 28 people lost their lives. Some of the victims, trapped in the chaos with no way to escape, still haven’t been identified.

Almost immediately following the disaster, construction crews moved in to begin dismantling the unsafe structures. Three weeks later, their work continues. But the buildings are offering a reminder that they still pose a threat.

Unsafe Construction, Unsafe Destruction
The new fire occurred this past Tuesday morning, according to VOD English. It may have started when a construction worker participating in the demolition got a little careless with his welding equipment.

Passers-by were able to take videos that they then shared on social media, displaying smoke billowing out from the top of the building and flames escaping through broken windows. Fortunately, there were no injuries, and workers were able to quickly douse the fire before it got out of hand.

Although most of the missing have been accounted for, there are three Cambodian families who say they haven’t been able to find their relatives. They were reportedly at the casino the night of the fire. But neither are among the victims that received treatment at area hospitals, nor are their remains among those that rescue personnel have recovered.

There are two bodies that were so badly burned that only DNA testing will be able to identify them. Those tests are now underway and the results will take a couple of weeks. Relatives of the victims, not the government or the casino, have to pay the US$500 fee for each test.

Since January 12, all efforts to locate more bodies have ended. Rescue personnel haven’t been able to enter the buildings because of their precarious instability. The casino’s owner, Grand Exclusive Poipet Cambodia, has been pushing for the site to be razed as quickly as possible, reportedly so it can build a new casino.

Not Enough Safety Procedures
Rescue personnel had to give up trying to find more bodies. They recovered the last one on January 11. That body, belonging to a 58-year-old Thai man, was in a room on the 10th floor of the casino. He died of smoke inhalation after the hotel’s electronic key system failed during the fire.

That key system was just one of many failures at the property. However, there were others that contributed to the disaster.

There was no alarm system at the property and many guests and employees learned of the blaze only through word of mouth. One employee explained that a phone call from her mother was the only indication she had of a problem at the casino.

Her mother saw the fire trucks and ambulances racing toward the property. She then contacted her daughter to see what was going on. Only then did the employee learn of the fire.

The property had no sprinkler or fire suppression system, nor were there marked escape routes. The latter probably wouldn’t have helped anyway, as some of the exits were reportedly locked.

The property’s demolition will make it difficult to determine exactly how inept the casino’s management was. Cambodian authorities are apparently unwilling to intervene. They have told local media that the property owner has the right to tear down the buildings, despite the loss of life and lack of accountability.

Source: https://www.casino.org/news/cambodias-grand-diamond-casino-catches-on-fire-during-demolition-following-deadly-fire/
Other Interesting:  How Do Casinos in the Metaverse Work?
See other website: http://www.orientalgame.com/