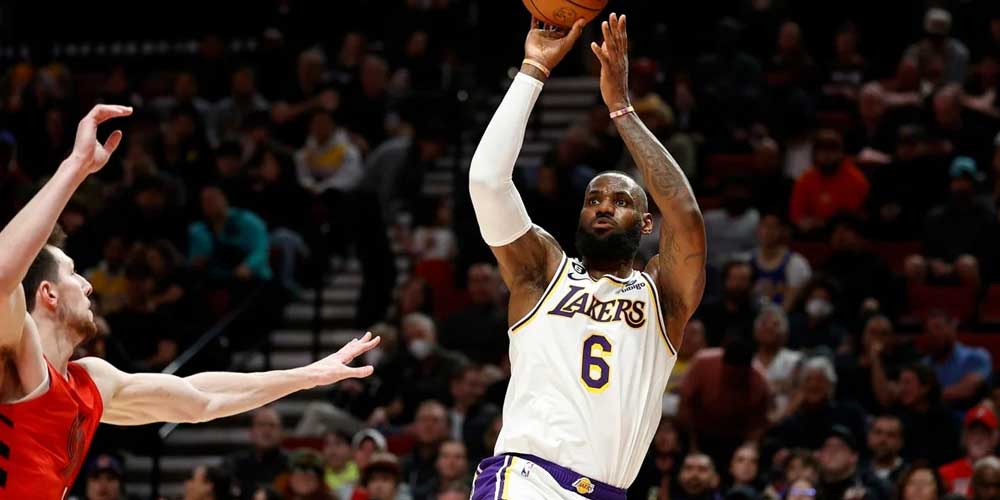 LeBron James from the Los Angeles Lakers needs only 224 more points to pass Kareem Abdul-Jabbar for the all-time NBA scoring record, and needs approximately nine games to achieve the epic feat. DraftKings has a prop bet where you can wager against which opponent, and on which date, James will set the new scoring record.

If James maintains his current career scoring average of 27.2 points per game, he’ll set the new NBA scoring record in a home game against the Milwaukee Bucks on February 9. Placing a prop bet on DraftKings that James will break the scoring record during that matchup pays out +180 odds.

Head coach Darvin Ham could also rest James because of load management, with two upcoming back-to-back games. The Lakers play the Los Angeles Clippers and San Antonio Spurs this week on consecutive nights. Next Monday and Tuesday, the Lakers play back-to-back games in the Big Apple versus the Brooklyn Nets and New York Knicks on consecutive nights.

LeBron Chasing Kareem and the Sky Hook
Abdul-Jabbar holds the all-time scoring record with 38,387 points, which took him 1,560 games spanning 20 seasons in the NBA. Abdul-Jabbar perfected the sky hook, which was impossible to defend against the 7-foot-2 Hall of Fame center.

Wilt Chamberlain held the previous record with 31,419 points before Abdul-Jabbar passed him on April 5, 1984, while playing for the Lakers. Abdul-Jabbar played five more seasons with the Lakers before he retired at the end of the 1988-89 season, setting the all-time record at 38,387 points.

It took 34 years, but someone will finally catch Abdul-Jabbar.

Abdul-Jabbar only attempted 18 3-pointers in his career, and he connected on just one. Abdul-Jabbar knocked down 6,712 free throws and 15,837 total baskets during his career for 38,387 points.

Will LeBron Break the Scoring Record on Feb. 9?
James would like to break the record at home in Los Angeles, so there are two games of note prior to the All-Star Break. The Milwaukee Bucks on February 9 offer up the shortest odds at +180, followed by the Oklahoma City Thunder in the previous game on February 7.

The All-Star Break begins on Thursday, February 16, and the Lakers don’t play again until February 23 when they host the Warriors.

The Lakers (22-25) are currently in last place in the Pacific Division and are on the Western Conference playoff bubble. But at least fans have something to root for in the next couple of weeks.