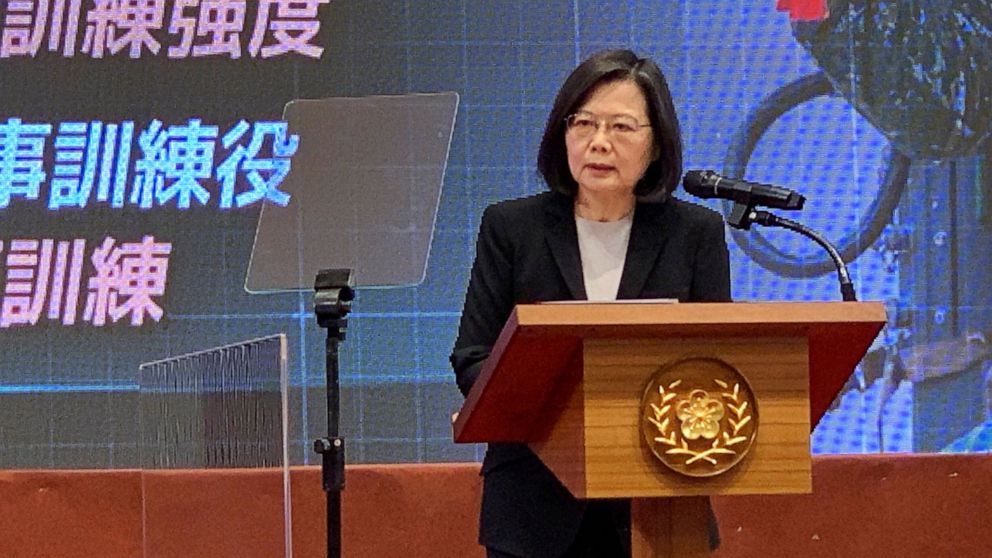 Taiwan will extend its compulsory military service from four months to a year starting in 2024.

Taiwan, which split from the mainland in 1949 during a civil war, is claimed by China. The decades-old threat of invasion by China has sharpened since Beijing cut off communications with Taiwan’s government after the 2016 election of Tsai, who is seen as pro-independence.

China’s People’s Liberation Army in particular has stepped up its military harassment, sending fighter planes and navy vessels toward Taiwan on a near-daily basis in recent years. In response, the island’s military actively tracks those movements, which often serves as training for its own military personnel.

The longer military service applies to men born after 2005, and will start Jan. 1, 2024. Those born before 2005 will continue to serve four months, but under a revamped training curriculum aimed at strengthening the island’s reserves forces.

“No one wants war,” Tsai said. “This is true of Taiwan’s government and people, and the global community, but peace does not come from the sky, and Taiwan is at the front lines of the expansion of authoritarianism.”

The White House welcomed the announcement on conscription reform, saying it underscores Taiwan’s commitment to self-defense and strengthens deterrence.

“We will continue to assist Taiwan in maintaining a sufficient self-defense capability in line with our commitments under the Taiwan Relations Act and our one-China policy,” the White House said, adding it continues to oppose any unilateral changes in the status quo by either China or Taiwan.

Beijing has often used military exercises to respond to moves it views as challenging its claims to sovereignty.

In August, U.S. House Speaker Nancy Pelosi visited Taiwan, and China responded with the largest-scale military exercises it’s held in decades, because it saw Pelosi’s visit as an official diplomatic exchange. Although the U.S. is the island’s largest unofficial ally, the two governments technically do not have diplomatic relations, as Washington does not formally recognize Taiwan as a sovereign state.

The plan sets Taiwan up for increasing its defense capabilities but what remains to be seen is how well the Defense Ministry will carry out the reforms, said Arthur Zhin-Sheng Wang, a defense expert at Taiwan’s Central Police University.

Taiwan’s current 4-month-long military conscription requirement was widely panned by the public as being too short and not providing the training that professional soldiers actually need. The government had slashed it down from a year to four months in 2017 as it was transitioning the army into an all-volunteer corps.

Of Taiwan’s 188,000-person military, 90% are volunteers and 10% are men doing their required four months of service.

A poll from the Taiwanese Public Opinion Foundation in December found that among Taiwanese adults, 73.2% said they would support a one-year military service. That support was across party lines, the survey found, spanning the Democratic Progressive Party and the more China-friendly Nationalist Party.

“This is one of the basic steps that should have been done a long time ago,” said Paul Huang, a research fellow at the Taiwanese Public Opinion Foundation. Huang said the implementation period in 2024, when Taiwan will elect a new president, meant that Tsai was “passing the buck” to her successor.

Among the youngest demographic group of 20-24, however, 37.2% said they opposed extending the military service, and only 35.6% said they would support an extension.

Other Interesting: Why Over 26,000 Crypto Employees Are Laid Off This Year
See other website: http://www.orientalgame.com/