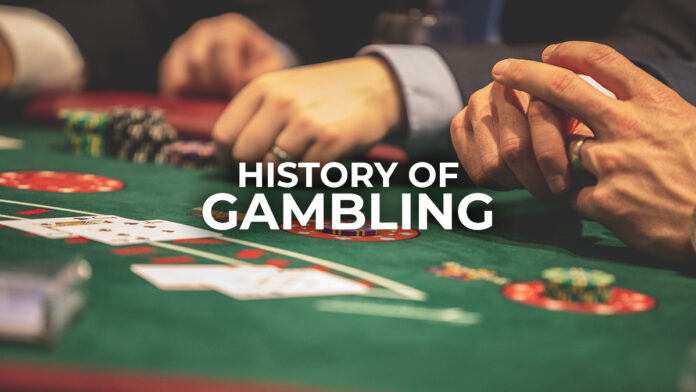 Casinos weren’t born in Nevada under the flashing Las Vegas lights. Our modern-day casino was conceived in Europe hundreds of years ago.

Our first proof of gambling started when people started playing dice at home and in camps, but prior to the establishment of casinos in Europe, the Chinese were already gambling centuries ago. Others believe even our traders learned the games from them.

During the early centuries, all kinds of card games and wooden tile-type games, which we believe to be called mahjong today, were played in China, and the first card game appeared in China during the 9th century.

Below are some thrilling facts about gambling that I believe will interest you.

The first to make gambling a job were the Chinese.

Several gambling organizations were established during the Tang Dynasty, allowing participants to bet at selected locations with high levels of protection. Likewise, during the Song Dynasty, the emperor approved the formation of more gambling associations and buildings to help improve and boost the gambling sector.

Many Chinese started to view gambling differently afterward; they started to think of it as a job and started getting committed to it since it became part of their livelihood.

The Chinese invented many games during this time period, one of which is still in use today: mahjong.

The casino we know today was born in Italy.

In 1638, the first legal casino was born in Venice, Italy, at the Ridotto.

During the 16th century, the first legal casino was born in Venice, Italy. It all started when the Palazzo Dandolo Hotel, now popularly known as the Hotel Danielli, was established. During that time, gambling was for the elites in society. The elites will gamble in a special private room in Hotel Dandolo. There were high-risk games

like basetta and biribi inside the casino. Biribi can be considered roulette in today’s world, and basetta is also similar to faro.

In the 18th century, when casinos were on the rise, the European monarchs decided to build and regulate state-approved lotteries, which would prevent illegal gambling.

Belgium was the second country after Italy to build and operate a legal casino, which was called Redoute. After Belgium, many other countries were inspired to follow suit, including Germany and France, and with all of these new casinos came to the rise of roulette

The Introduction of the railroad made Monte Carlo the casino capital of Europe. all Europeans’ attention was shifted to Monte Carlo, and Monaco became the top gambling destination.

Riverboat gambling was popular among Americans.

During the colonial period, British authorities didn’t regulate or outlaw gambling, so there were plenty of establishments where one could find various types of games.

But the boom in casinos happened in New Orleans during the 1800s.

Prior to the New Orleans gambling boom, there were no regulations for games, but shortly after, these casino establishments in New Orleans were illegalized, but to the government’s surprise, New Orleans casinos began operating in riverboats along the Mississippi River, which is outside of the city’s jurisdiction and cannot be arrested. It was popular for years but died out when the civil war started. Later, gambling started booming in California and the wild west and from there it spread to other states and countries