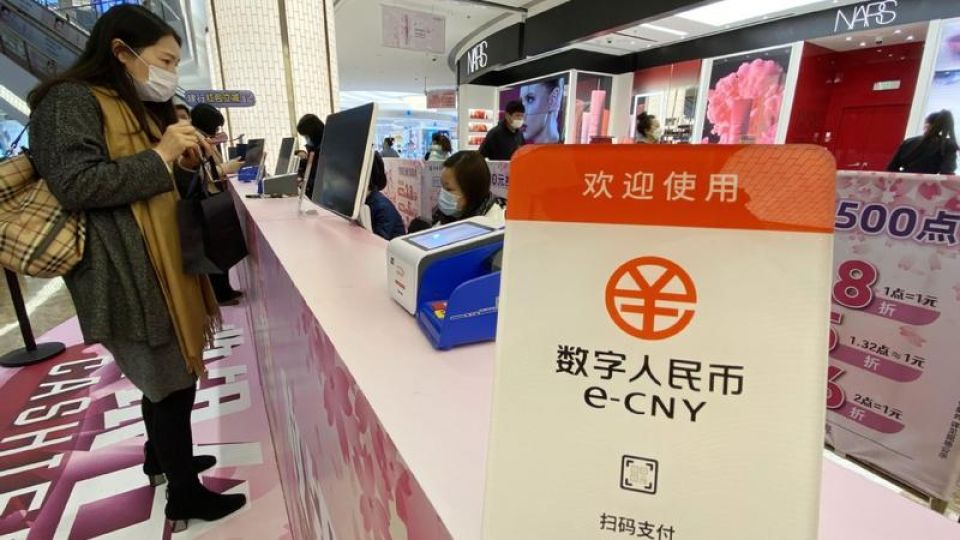 Hong Kong, with its inherent advantages, is set to become a vibrant center for use of the digital yuan in international trade.

The digital yuan, or e-CNY, is a fiat currency in virtual form issued by the central bank, the People’s Bank of China. A fiat currency is a national currency whose value is derived from a country’s promise to back it, not from physical commodities such as gold or silver.

As a forerunner in the global race to test a digital currency, e-CNY research started in China in 2014.

A pilot program was launched in 2019 with the digital currency put into trial use at bricks-and-mortar businesses, university campuses and for receipt of pensions.

In October, 23 regions on the Chinese mainland adopted the e-CNY, covering nearly one-fifth of the population. The value of transactions soared to about 100 billion yuan ($13.9 billion), comprising the lion’s share of global digital currency transactions.

The digital yuan is not confined to the domestic market — it’s all about going global. A PBOC white paper released last year, which tracked the progress made in researching and developing the e-CNY, said China would “explore (the digital yuan) in improving cross-border payments”.

PBOC took part in the world’s largest cross-border multicountry payment trial, the mBridge project, for a six-week period this year. The Hongkong and Shanghai Banking Corp is one of the participants using e-CNY in this project in Hong Kong.

One of HSBC’s clients, TCL Technology, which is based in Guangdong province, said in a statement, “Using mBridge to proceed with transactions can help eliminate additional charges by a correspondent bank, and with faster payment processing.”

Oriol Caudevilla, board director at the Global Impact FinTech Forum, said one of the major reasons for developing the digital yuan is to promote its cross-border adoption.

“At the end of the day, one of China’s main objectives is to convert some US-dollar-denominated exports into yuan-based exports. Therefore, it’s in China’s interests not only to make the digital yuan an effective domestic tool for consumers in making retail payments, but also to augment the yuan as a payment currency in the global financial system,” Caudevilla said.

However, as promising as the future looks, there is an elephant in the room to face before the e-CNY can stride fully onto the world stage.

With the mainland’s capital controls still in place, the question is how far and how fast can Hong Kong claim its share of the burgeoning cryptocurrency financial industry? The mainland, despite continuing to open up its financial sector, still imposes certain levels of capital control. The digital yuan needs an ecosystem of its own to make itself a payment currency in the global capital market.

Judy Chen Yingyin, senior researcher at the Our Hong Kong Foundation, a think tank based in the city, said she expects technological upgrades, which can provide useful tools to monitor capital flows, to help regulators further ease capital control.

“Capital control (on the mainland) does not mean suffocating its flow. It’s about ensuring transaction safety and sustaining a stable financial system,” she said.

The digital yuan is designed to give the central bank a level of visibility and control that real cash does not provide.

On the other hand, the gravitational pull of the US dollar is palpable, due to the sheer influence of global economics and trade relations, as the greenback is the world’s most-traded currency. However, its recent relentless strengthening, along with the United States barring financial transactions with Russia’s central bank, has sent monetary ripples across the globe.

In a recent research paper posted on the website of the Carnegie Endowment of International Peace — a nonprofit international affairs think tank — Robert Greene, a US scholar focusing on trends in the Chinese financial sector, said many Southeast Asian countries, including Singapore, Malaysia, Indonesia and Thailand, are stepping up efforts to reduce use of the US dollar.

In September, PBOC signed a memorandum of understanding with Laos’ central bank to set up renminbi clearing arrangements to promote investment and cross-border trade using the Chinese currency.

Harvey Chan, business development director at e-payment solutions provider Payment Asia, which is based in Hong Kong, said he believes the advantages of the e-CNY — endowed with financial technology that allows faster and more efficient cross-border settlements, as well as lower exchange rate costs — can inject new blood into renminbi internationalization.

He feels that economic prowess influences the decision of China’s trading partners to use the digital yuan, with enormous cost savings for foreign enterprises doing business with the nation.

For example, according to global consultancy company Oliver Wyman, the use of electronic currency in trade between Singapore and China could lead to estimated savings of between S$16 billion and S$24 billion ($11.4 billion and $17.4 billion).

This represents 3 to 5 percent of Singapore’s GDP “due to fee savings from lower transaction costs and liquidity savings to the real-time treasury, and incremental volumes from lower fees or more liquidity”.

Given favorable external and internal conditions, Hong Kong is likely to become a vibrant center for use of the digital yuan in international trade due to its competitive advantages as the world’s largest offshore renminbi center and the “one country, two systems” principle — the cornerstone of the city’s capitalist system.

Hong Kong enjoys free trade and capitalism different from that of the mainland. On the opening day of the 2022 Hong Kong Fintech Week, which was held from Oct 31 to Nov 4, the city announced a new regulation aimed at easing restrictions on digital assets — in stark contrast to the mainland’s approach to cryptocurrencies.

Renminbi deposits in Hong Kong exceed 800 billion yuan. According to the Society for Worldwide Interbank Financial Telecommunications, or SWIFT, more than 70 percent of global offshore renminbi payments are processed in Hong Kong. In July, PBOC upgraded a currency swap facility with Hong Kong to a permanent agreement.

Chan said use of the e-CNY in the mainland’s clearing house for international transactions — the Cross-Border Interbank Payment System — would bypass SWIFT, the US-dominated payment network, thus gradually diversifying global settlements. In general, most overseas transactions go through SWIFT, a messaging network covering more than 11,000 banks and financial institutions from more than 200 economies.

Caudevilla said: “We may see the start of a slow shift toward the yuan. China’s willingness to develop a digital yuan could lift the efficiency of yuan-denominated cross-border payments and create new avenues for the country to bypass the global US dollar monetary system. But even with the digital yuan, the renminbi will not replace the US currency’s dominance immediately.”

Last year, PBOC’s digital currency research institute and clearing center established a joint venture with SWIFT. As of September, the US dollar accounted for some 42 percent of payment instructions transmitted by SWIFT in terms of value, compared with 2.44 percent for the renminbi — up from 2.31 percent the previous month, according to SWIFT.

Antonio Fatas, economics professor at INSEAD, a business school, said the US dollar will continue to dominate global monetary flows for quite a long time due to the size of the US’ economy, its financial markets and its openness to capital flows.

As of the second quarter of this year, the US dollar accounted for about 60 percent of the world’s foreign exchange reserves — well above the renminbi’s 2.88 percent, according to the International Monetary Fund.

In Hong Kong, the digital yuan is being used for retail payments at a faster rate than for global trade.

In September, the Hong Kong Monetary Authority, or HKMA, — the city’s de facto central bank — said the e-CNY technical trial had entered its second phase, focusing on use of the Faster Payment System, a platform that enables people to transfer money online between various banks.

The number of banks taking part in the trial’s second phase has risen from one to four — Bank of China (Hong Kong), HSBC Hong Kong, Standard Chartered Hong Kong, and Hang Seng Bank. Merchants and the banks’ employees have been invited to take part in the process.

Colin Pou Hak-wan, the HKMA’s executive director of financial infrastructure, said, “We will invite more e-CNY operating institutions and local banks to join the test to facilitate use of the digital yuan by Hong Kong residents on the mainland in the future.”