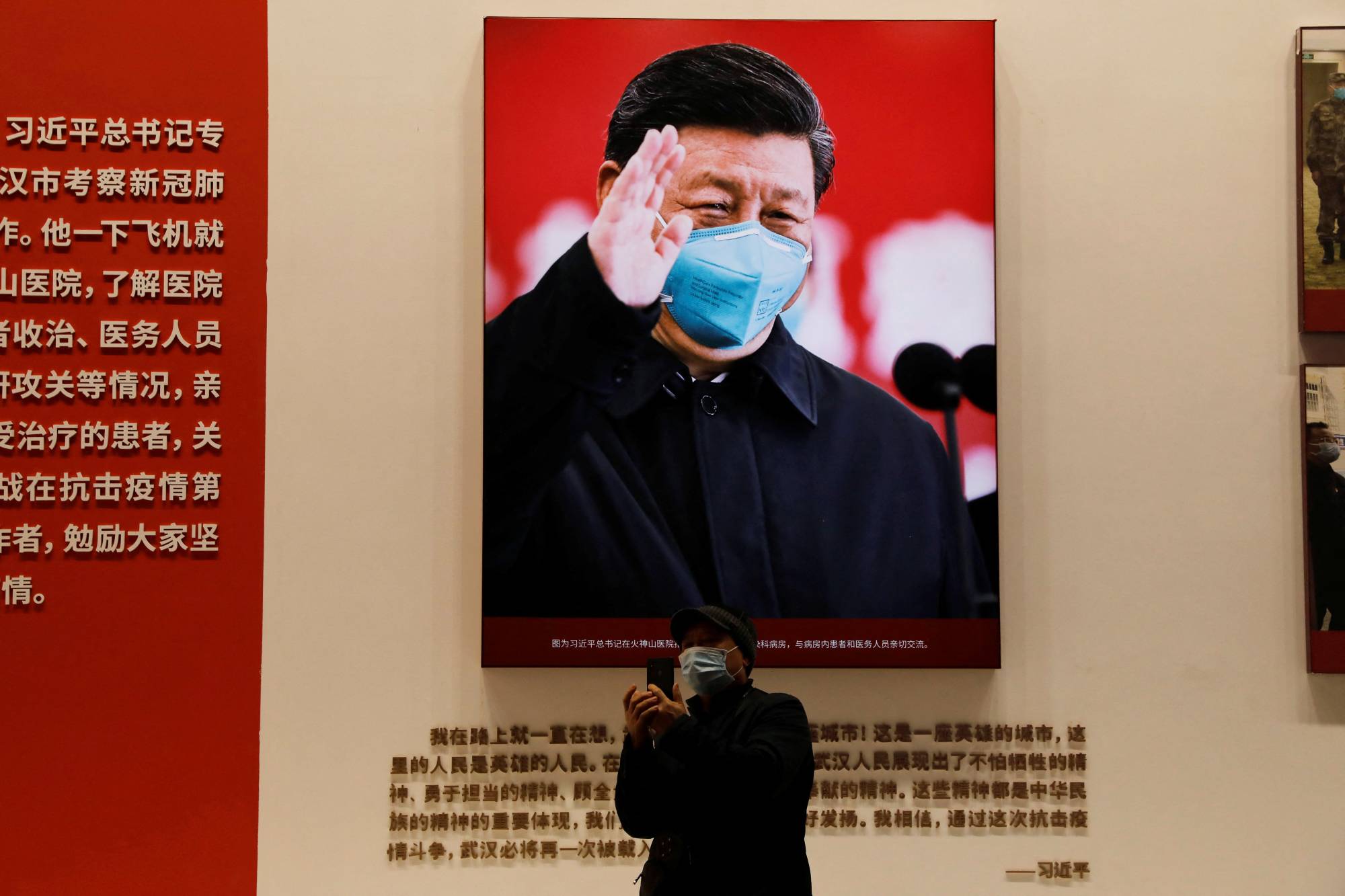 With demonstrators having upped the pressure on Beijing to change its stringent “COVID-zero” policy, the Chinese leadership’s prioritization of containing infections rather than effectively rolling out treatment for the virus has left it with only a few hard options to address the protesters’ demands.

While the government recognizes the damaging socioeconomic impact of quarantines and lockdowns, it also understands that ceasing efforts to contain the virus would rapidly overwhelm the health care system and lead to a surge in deaths.

Faced with this dilemma, the Communist Party will eventually wind down restrictions, but for now the government is likely to follow a gradual multipronged strategy to the pandemic. This approach will see a focus on ramping up vaccinations, acquiring more effective jabs, changing the narrative about the virus, finding better treatment and improving communication.

“There is a very narrow corridor out of this conundrum,” said Vincent Brussee, a governance researcher at the Berlin-based Mercator Institute for China Studies.

Brussee said the Chinese authorities first need to create “a window of opportunity” for a reopening by continuing strategic measures and small-scale lockdowns, while curbing the arbitrary nature of measures and supporting negatively affected areas.

During this time, Beijing would need to quickly increase vaccination rates for the elderly, improve scientific health communication to the public and prepare health care resources such as intensive care beds and anti-viral drugs.

“Opening-up should then be gradual and follow vaccination rates,” Brusee noted, pointing out that this would be similar to the 20-point adjustments China’s National Health Commission (NHC) released last month, which eased certain measures affecting travel, quarantine, lockdowns on businesses and testing, as well as other aspects of policy.

However, poor communication has led to these changes being implemented inefficiently, as highlighted in the protests that have erupted across the country.

A series of small tweaks

There are signs that Beijing is beginning to change tack, though, with the country’s top official in charge of the COVID-19 response, Vice Premier Sun Chunlan, declaring Wednesday that China is entering a new phase in fighting the virus as the omicron variant weakens and more people get vaccinated.

The official acknowledgement that omicron is less severe, along with talks about rolling out a fourth vaccination campaign and bolstering uptake among the elderly, indicate that Beijing is stepping up efforts to move away from COVID zero.

But with the number of infections rapidly growing across the country, more local lockdowns are expected. In an attempt to minimize the disruptive impact of these controls, the NHC has called on officials to avoid excessive measures and respond to “reasonable requests” of the people “in a timely manner,” in what appears to be a concession to the protesters.

“Chinese policymakers want to have time to review the performance of their COVID policy tweaks, before introducing further tweaks based on empirical evidence of the effectiveness of their measures and the trajectory of the virus’s evolution,” said Xinran Andy Chen, a Shanghai-based analyst at China consultancy Trivium.

They will only remove restrictions that have been proven to be excessively disruptive, unnecessarily resource-consuming and ineffective in guarding against the actual risk of spreading the virus, Chen added.

At the same time, he said, if the central government succeeds in making local governments stick to the 20-point adjustments announced in November and “not go overboard with excessive COVID restrictions, this will go a long way toward alleviating some of the public frustration we are seeing today.”

A key issue is that after almost three years of zero-tolerance policies, Beijing has created a situation in which only a very small fraction of China’s population has been infected and therefore carries some natural immunity.

While this forms the basis of the government’s claim that it has protected most citizens from exposure to the virus, this lack of natural immunity poses another problem.

Although nearly 90% of the Chinese population has received two doses of China’s vaccines, which do not use the mRNA technology of Pfizer and Moderna’s, studies estimate that about six months after the second dose has been administered, the antibodies triggered by these shots drop to a level that is considered low or even undetectable. This has resulted in a large immunity gap compared with the rest of the world.

In addition, only 65.8% of over 80-year-olds are reported to be fully vaccinated and just 40% have received booster shots.

Beijing’s failure to implement more effective health policies, such as authorizing the use of mRNA vaccines and prioritizing the elderly in its vaccination campaign, has meant that the population remains needlessly vulnerable to future outbreaks, Yanzhong Huang, a China expert at the U.S.-based Council on Foreign Relations, wrote in an article for Foreign Affairs, pointing out that China’s population “may be unique in having almost no natural immunity to the virus.”

In light of this, a sudden reopening would almost certainly result in hospital overruns and a large number of infections and deaths: a risk Beijing would be unwilling to take, particularly given the political and socioeconomic consequences involved.

Such a move could cause the wider public to question the sincerity of the government’s claim that it has put people’s lives above all else, which would lead to questions about the government’s legitimacy, Chen said. Moreover, it could result in public opinion quickly shifting against lifting the restrictions.

On top of this, rampant COVID-19 infections could seriously disrupt supply chains in and around China, as factory workers, who often live in densely populated dormitories, would get infected in droves.

“This means that a premature lifting of COVID restrictions would not lead to an immediate economic recovery. On the contrary, the economic conditions would get much worse in the short term,” Chen noted.

Changes in narrative and treatment

Beijing has so far refused to import more effective foreign-made vaccines, and experts say that in order to speed up the reopening process, China would not only need to produce its own mRNA vaccines but potentially also reach license production agreements with foreign companies or even resort to direct imports.

“Rather than spending billions of dollars on enforcing its COVID-zero-policies, Beijing should scale up access to more effective Omicron-specific vaccines and therapeutic treatments,” Huang wrote, calling for a nationwide vaccination campaign to ensure that more than 90% of the public over the age of 65 and most of the country’s population receive an mRNA booster shot.

Analysts say that one of the key steps for a strategy change is for Beijing to alter the way it talks about the pandemic.

“China’s leaders would have to tell the truth about the severity of the virus and the treatments available for it and allow the media to encourage coexistence with COVID-19,” Huang wrote.

Another important step, he noted, is to enforce the triage measures that have worked in many other countries to prevent the health care system from being overwhelmed.

“These would include ensuring that only the most severe cases are treated in hospitals while people with minor or asymptomatic cases recover at home, or if conditions do not allow that, in makeshift quarantine centers,” Huang wrote.

He also argues that Beijing should phase out its COVID-19 health QR code, as well as centralized mass PCR testing, while encouraging the use of at-home rapid test kits. In addition, Beijing could stop providing daily updates on the number of new infections and deaths to minimize fear whenever there is a spike in cases.

“With such measures in place, a relaxation of policy by the Chinese government would lead to a significant increase of COVID cases,” Huang wrote.

But he also noted that a well-designed exit strategy can prevent the viral wave from leading to a mass die-off.