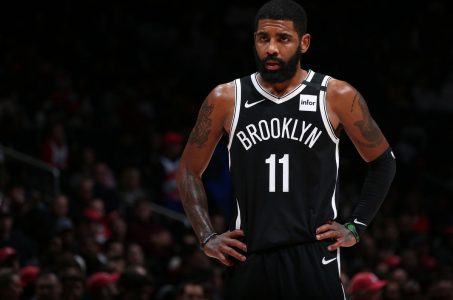 ESPN will be televising the New York Knicks vs. Brooklyn Nets game at Barclays Center tonight, where the latter — going through the Kyrie Irving anti-semitism controversy — is a 2-1/2 point favorite. And that is odd, even in the odds business.

The Knicks are coming off one of their best performances of the season, making a team-record 10 3-pointers in the first quarter and jacking up a franchise-record 48 in a victory at Minnesota. The Nets are coming off a loss at Dallas in which a missed free throw at the end of the fourth quarter by Kevin Durant deprived them of a chance to tie the game, and Durant was then out of position to go for a game-tying 2-pointer after Royce O’Neal grabbed the offensive rebound off Durant’s intentionally missed third free throw attempt.

Brooklyn is now 4-7 and hanging with the Miami Heat as the East’s biggest underachievers, and tonight’s nationally televised matchup will mark the fourth game of Irving’s five-game suspension for his social media idiocy. That includes linking to the film Hebrews to Negroes: Wake Up Black America, which contains anti-Semitic tropes.

What Comes Next For Kyrie and the Nets?
The Nets have set six conditions for Irving’s return, and this drama will continue to unfold for several reasons. Many believe Irving will not comply with any or all the six conditions: A condemnation of the movie; a meeting with Nets owner Joe Tsai; a meeting with Jewish leaders and members of the Anti-Defamation League; sensitivity training; ant-Semitic training; and a $500,000 donation to anti-hate causes.

The Athletic was the only media outlet to report anything of substance about Irving’s Election Day meeting with commissioner Adam Silver, describing it as “productive and understanding.” No details were provided.

Silver’s less-is-more media relations policy has left everyone guessing exactly where this thing is headed next. The Boston Globe quoted Celtics guard Jaylen Brown as saying the NBA Players Association plans to appeal the suspension, and Irving has a history of non-conformity and non-compliance that has frustrated every franchise he has ever played for.

His refusal to reply to calls and text messages from Nets owner Joe Tsai appears to have infuriated the team owner.

Irving has been silent lately on social media, but that could change at any moment. Whether he plays again in Brooklyn or elsewhere in the NBA could be impacted by his next public move, and there is a school of thought that the Nets made the conditions for his return so onerous because they want to keep him away from the team and try to move him in a trade.

Irving is in the final season of an expiring $36.9 million contract, and his toxicity may be too much for the Nets and many other teams, but not all 30 teams. The NBA is only a few weeks into the 2022-23 season, and there are plenty of struggling teams that might take a chance on Irving if the price was right (raise your hand, Rob Pelinka).

After hosting the Knicks tonight, the Nets begin a five-game West Coast trip with a weekend back-to-back against the Clippers and Lakers in Los Angeles, and Irving will be eligible to play against LeBron and the horror show Lakers on Sunday night if a compromise is reached. The Saturday game against the Clippers will be Game No. 5 of his suspension.

How Much Do You Know About Kyrie Irving?
It should be noted that Irving is stubborn and self-righteous, and he had a right as an American to voice his opposition to New York City’s vaccine mandates, which have since been ruled unconstitutional. At a news conference in Brooklyn, he defended his support of the film and an antigovernment conspiracy theory promoted by the Infowars host Alex Jones, calling them “true.”

“History is not supposed to be hidden from anybody,” Irving said. He added: “I’m not going to stand down on anything I believe in. I’m only going to get stronger because I’m not alone. I have a whole army around me.”

Irving had a contentious exchange with ESPN reporter Nick Friedell after the Nets decided to allow Irving to meet with the media. “Did I do anything illegal? Did I hurt anybody? Did I harm anybody?,” Irving said. “I am not going to stand down on anything I believe in.”

If you watch the entire video, you will not see Irving yielding any ground.

How Will This Impact Game vs. Knicks?
We may learn more about the state of the situation before the 7:30 p.m. EST tipoff. But a cone of silence from the NBA, the NBA Player’s Assn., and the Nets seems designed to keep the Irving situation out of the spotlight in order to help diffuse it. The Nets no longer have a head coaching spot to fill, having decided to give the job to Jacque Vaughn through 2023-24.

The New York media had been piling on Tsai and general manager Sean Marks for even considering the head coach hiring of Ime Udoka, who has been suspended by the Boston Celtics after having an affair with a married team employee and sending inappropriate text messages. That onslaught should cease now, unless Kyrie makes things change, which is always a possibility and comes with the territory of having him on your roster.

Amid all the turmoil, there has been a lack of focus in New York on the accomplishments of the Knicks, who have won two of three as coach Tom Thibodeau has changed his starting lineups and rotations several times.

Cam Reddish has supplanted Evan Fournier as a starter, and Obi Toppin has become a solid bench contributor whose odds for the Sixth Man award bear watching. He is +8000 at Caesar Sportsbook, which lists Russell Westbrook of the 2-8 Lakers as the +150 favorite, followed by Jordan Poole of Golden State at +275. But Westbrook has been the subject of rampant trade and buyout speculation, and Poole is coming off a 2-point dud of a game in a victory Monday over Sacramento. That’s a game in which the referees erred in not calling a foul on Klay Thompson, as Kevin Huerter tried to tie the game on the final shot.

Sixth Man and Most Improved Player offer smart wagering opportunities at high odds over the course of the first half of the season, and this year in particular they bear watching. That’s because Paolo Banchero of Orlando is running away with the Rookie of the Year award (he is -950 at Caesars and -700 at FanDuel), and Milwaukee Bucks forward Giannis Antetokounmpo looks accurately priced as the +240 MVP favorite. That’s especially because the Philadelphia 76ers and Joel Embiid (+2000 for MVP) are off to a slow start, and every team in the West is underachieving in comparison with the first place Utah Jazz (9-3).

In case you were wondering, the odds on an NBA Finals matchup of the Cleveland Cavaliers (8-2) and Donovan Mitchell against the team that traded Mitchell are currently on the board in New York only at Caesars. Cleveland to beat Utah is +30000, and Utah to beat Cleveland is +50000.

Which Odds Are Appealing in Nets vs. Knicks?
DraftKings has an offer to automatically make a winner of anyone who takes the Knicks on the moneyline (max bet is $100) if New York takes a 10-point lead at any point during the game. They don’t even have to win, just lead by 10 at some point.

Durant is +1500 to record a triple-double, and he finished one rebound shy three games ago at Washington. Last season, he had 32 points, 11 assists and 10 rebounds in the final meeting of the season against the Knicks, and he scored 53 vs. New York the last time the teams played in Brooklyn.

R.J. Barrett is +1100 and Royce O’Neale is +1700 at Draft Kings to double-double, and although neither has done so this season, both are getting heavy usage in recent games. New York is 5-5-0 against the spread and Brooklyn is 4-7-0, while the Knicks have gone over in half of their 10 games and the Nets have gone over in four of seven.

The best bet of them all is that Knicks fans will outnumber Nets fans, even though the game is in Brooklyn. That happens every single time these teams play in Kings County. And, yes, you should expect Irving to somehow tangentially become a topic of conversation.