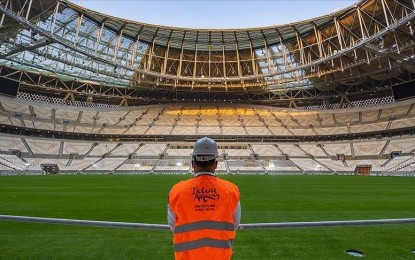 Almost 3 million tickets have been sold as the 2022 FIFA World Cup is set to start in Qatar next month, the world football’s governing body said on Monday.

“Ticket sales for the FIFA World Cup Qatar 2022 are approaching 3 million as the countdown continues to the first edition of the tournament in the Middle East and Arab world, which will get underway at Al Bayt Stadium in just over a month’s time on 20 November,” FIFA said in a statement.

“We have always said that Qatar will deliver the best-ever edition of the FIFA World Cup. And as you look around the country today, at the state-of-the-art stadiums, the training pitches, the metro, the wider infrastructure, everything is ready and everyone is welcome,” FIFA President Gianni Infantino said in a video message.

Organizers said 30,000 rooms have been available to the World Cup visitors.

They also stated that 2.89 million tickets were sold for the 64 matches, and Qatar, the US, Saudi Arabia, England, Mexico, the United Arab Emirates, Argentina, France, Brazil, and Germany were the highest-demand countries.

Qatar 2022, the first World Cup in the northern hemisphere’s winter, will be played between Nov. 20 and Dec. 18.

Brazil are the record holders, winning the World Cup five times, the last in South Korea and Japan 2002.

France is the reigning champion.