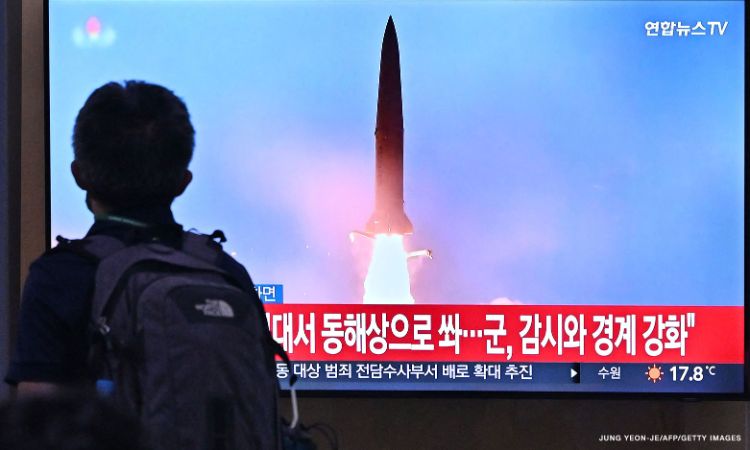 North Korea fired two short-range ballistic missiles into the waters off the east coast of the Korean Peninsula on Thursday morning local time, according to South Korea’s Joint Chiefs of Staff -— a move likely to escalate tensions in the area after a series of shows of military might this week.

Originating from the Samsok area of North Korea’s capital Pyongyang, according to the South Korean statement, it was North Korea’s sixth ballistic missile launch event in the past two weeks.

It also closely follows a highly provocative launch by the isolated country on Tuesday, when North Korea fired a ballistic missile without warning over Japan — the first in five years — prompting Tokyo to urge residents to take shelter.

The United States and South Korea responded with missile launches and exercises around the Korean Peninsula on Tuesday and Wednesday.

Last month, the US, Japanese and South Korean navies conducted joint anti-submarine exercises in international waters off the east coast of the Korean Peninsula to improve response capability against North Korean submarine threats.

The aircraft carrier USS Ronald Reagan and its carrier strike group as well as destroyers of South Korea and Japan were involved in the joint exercise, according to the South Korean Navy.

Experts have warned that North Korea’s recent tests suggest an even greater escalation in weapons testing could be on the horizon.

“North Korea is going to keep conducting missile tests until the current round of modernization is done,” Jeffrey Lewis, director of the East Asia Nonproliferation Program at the Center for Nonproliferation Studies, told CNN earlier this week.

A nuclear test could come “anytime,” he added.

South Korean and US officials have been warning since May that North Korea may be preparing for a nuclear test, with satellite imagery showing activity at its underground nuclear test site.

If North Korea conducts a test, it would be the country’s seventh underground nuclear test and the first in nearly five years.

Pyongyang on Thursday accused the US of contributing to tensions around the Korean Peninsula and framed its own launches as reactive.