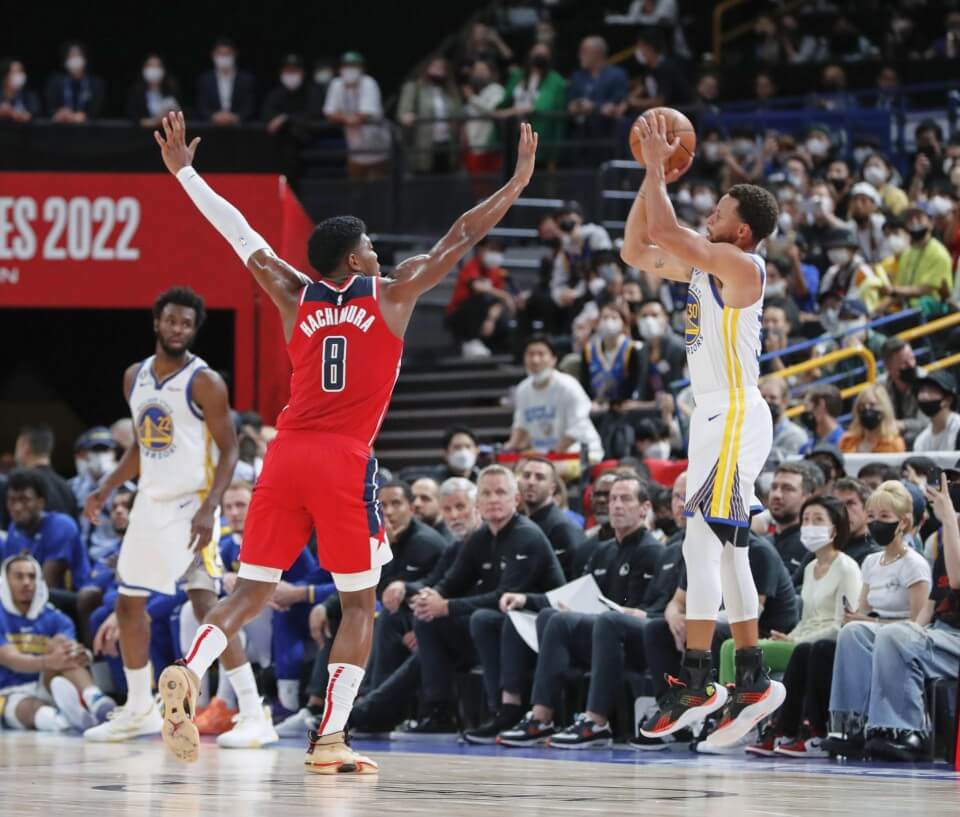 NBA superstar Stephen Curry lauded Japan’s “amazing fan base” after leading the Golden State Warriors to a 104-95 victory over the Washington Wizards in the second of two preseason exhibition games at Saitama Super Arena near Tokyo on Sunday.

Curry scored a team-high 17 points in just 17 minutes, while Kristaps Porzingis scored 18, and local hero Rui Hachimura had 11 points and 10 rebounds for the Wizards in front of another sellout crowd following Friday’s 96-87 win for the reigning NBA champion Warriors.

“Been looking forward to this trip for a while,” Curry said. “Love Japan, love Tokyo, love this whole area and it’s been an amazing four days, and I wish it was a little longer.”

The two-time NBA MVP spoke of wanting to return to Japan “at some point every summer” and said he particularly enjoyed meeting and interacting with young fans during the trip.

“That’s what the game is about, trying to build inspiration, confidence, fun for the next generation…play in front of an amazing country and fan base that supports us — not just the Warriors but the NBA,” he said.

The Wizards led 85-74 heading into the final quarter, but with both teams benching their rotation players, a Warriors backup unit paced by rookie forward Patrick Baldwin Jr. came roaring home in the closing minutes.

Two-time All-NBA shooting guard Klay Thompson was kept out of the Golden State lineup once more, while the Wizards rested star shooting guard Bradley Beal after he played 18 minutes of the opening game.

Just as he did on Friday, Hachimura pumped up the parochial crowd with a number of highlight plays during his 26 minutes on the floor.

He finished through contact twice on his way to a pair of three-point plays in the first half, receiving huge cheers each time. He also brought fans out of their seats while showing his range on a catch-and-shoot three.